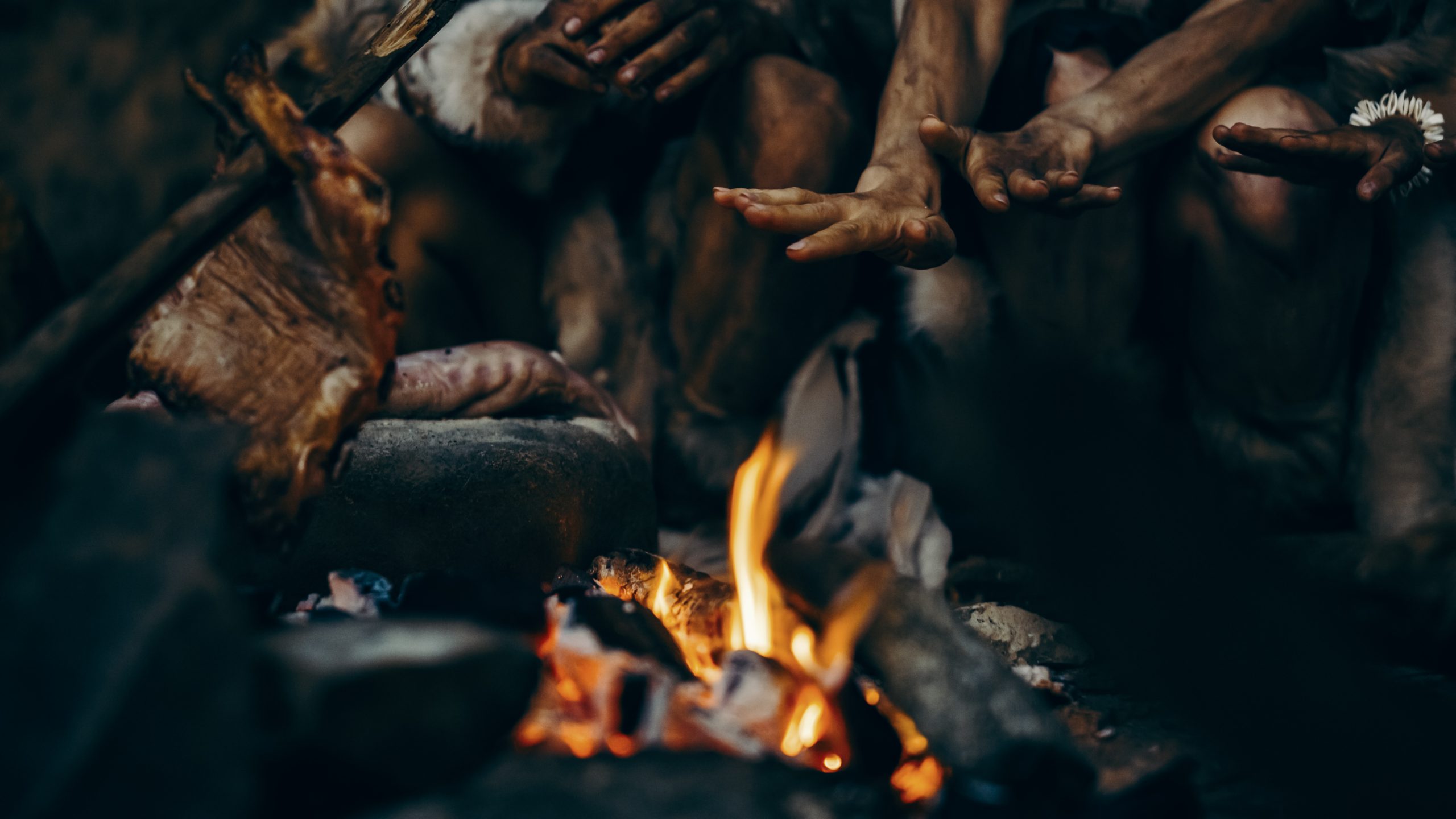 Previously we analysed various signals that may explain the cry for the Great Reset. Today we will look at the wisdom of the Stone Age and what we could relearn.

Translated means “Round Goes the Wheel of History” – “History Repeating” (Propellerheads, 1997).
I have never fully understood this Polish wisdom.

So, let’s go for a journey back through human history.

Are you ready? Let’s start the journey.

The Stone Age emerged at the back of the Ice Age. The weather improvement (see below) allowed for technology advancements. At this point, the majority of humans gave up nomadic lifestyle (hunter-gatherers) to begin primitive farming, cultivation of cereal and domestication of animals.
Adaptation and survival in unknown territory required mental resilience, creativity and collaboration.

Since we spent less time on hunting, we invested more time on innovations. We improved technology for farming (irrigation system), storing crops and herding.
We designed and built symmetrical, sharper tools. These light-weight instruments allowed villagers, regardless of their gender, to equally contribute and support their local primitive community.
Anthropologists discovered that in many Stone Age societies soft skills (cooperation, consensual decision-making, equality of individuals) dominated the cultural ethos of this era.

According to archaeological findings, climate change contributed to mass migration and brought an end to this era.

Bronze and Iron Age were characterised by use of bronze, later replaced by iron. We discovered how to make steel (by heating iron with carbon) and produce tools which were much stronger than bronze. We invented the wheel and iron plough which required physical strength. These innovations brought an end to equality in terms of gender collaboration but contributed to advancement in agriculture and in general, improved our life.

In circa 1200BCE we took advantage of our metallurgy knowledge to produce weapons, such as: swords, spears and armour.
This era marks the beginning of our pursuit to expansion and domination. As a result, we built ditches and walls around our villages, which were guarded against attacks from rival clans by the warrior caste.

At this point we have to mention development of the alphabet, which allowed us to start preserving legends, tales and old stories, which we believe in till today.

The end of this period is marked by Viking raids and the Roman conquest.

During this era, the Greeks and Romans were laying foundations for Western Civilisations. They developed one of the most enduring contributions to the modern world – a system of political reforms called ‘demokratia’ ‘rule by the people’ (‘demos’ – people and ‘kratos’ – power). This is the system which for the first time divided society into groups of unequal privileges.

At the same time, other parts of the world, like Africa, America, China, India, saw an incredible growth. The Silk Road opened passage from East to West connecting explorers and traders from China to Europe (Greece) and Africa (Egypt).

If you consider that the majority of globe was unpopulated, some of us could even call it … carnage.

The invasion of Germanic Tribes ultimately brought collapse to the Roman Empire and an end to this era. Although, destruction of the Empire was not an intention of these tribes -who only wished to share in advancements of the Roman Empire.

Middle Ages is used to describe time between the fall of Rome and the beginning of the Renaissance.

After the collapse of Rome, the Catholic Church became the most influential institution striking alliances with the emerging power structures (kings, queens and other leaders). The invention of the printing press meant that the printed world and information was controlled by the State and Church.

At the end of 11th century the Church authorised military expeditions known as crusades.
No one won the crusades.
In fact, thousands of people lost their lives but had gained something else – belief in common stories and sense of belonging to a specific group.

This era saw many developments including: gunpowder and the first surgical equipment.
Interestingly enough an end of this era is marked not by a brutal war using gunpowder but a pandemic, known as the Black Death. It killed 50 million people, reducing the human population from 80 to 30 million (60%)

It was not all doom and gloom.
The Late Modern Period brought major advancements in science and technology but also marked changes in culture and mindset, bringing progress towards equality and diversity.
It was at the end of 19th century (approx. 100-150 years ago) when minorities of colour and women have been empowered to vote and obtain higher education.

The heavy machinery has been automated and for the first time since the Stone Age, physical strength is not required as frequently as in the past to operate.

And … in a nutshell, this is where we are today.

Are you still rolling your eyes questioning the relevance of the Stone Age to today’s circumstances? All right then, let me show you the trend.

We transformed our lives from being hunter-gathers to settlers and … started working from home. Is that not where we are today?

Some would argue that hunter-gatherers traded their lifestyles for the unknown. Is this not similar to questions we have been asking today – what will our world post COVID-19 look like?

Light weight tools used in the Stone Age did not discriminate our capabilities. These tools promoted diversity and equality, encouraging collaboration to solve problems. Is this not what today’s automation and Internet of Things (IoT) could be here to do?

We entrusted our intuition and used our instinctive skills – mental resilience, creativity and emotional intelligence to conquer our challenges and support each other.
Are these not the same top skills suggested by influencers to acquire in order to adapt to the 21st century challenges?

Finally, last on the list are the Stone Age self-sufficient communities.
You may question if this one is applicable in the era of successful globalisation, pursuit of low prices and shareholders’ satisfaction?

The Law of Nature

If I told you last year, that we are in for a long-term supply chain disruption, threatening our lives, what would you say? I guess the majority of you would laugh at me…I would probably laugh too.

Today, no one is laughing as the micro-body (COVID-19) has shown the sheer power of nature and our insignificant place in the ecosystem.

Today it may be viral infection; tomorrow something else – who knows? This is the law of nature, outside our control.

The bottom line is – we thought we knew it all, that we are the masters of the Universe. Today we know that we don’t know and not even our sophisticated algorithms could prepare us for what may come next.

More importantly, as we recover, we come to the realisation that we have been very ill-prepared for today’s pandemic.
4000 years later, glocalization (the self-sustainability of our local communities) gets back on the agenda.
However, let’s not forget about globalisation and international collaboration as neither pandemics, financial crises nor environmental disasters respect national borders.

Have we made a full circle around the wheel of humankind history? Perhaps.
Inevitably at this point a question arises – where do we go from here and who will lead us?

Wiser in knowledge of historical events, are we at the brink of the Great Reset and a decision to make? Do we pursue domination or reflect and change the direction? Do we prepare the path for our kids or kids for the path?

Throughout this article, you were tracking what was unique to each era.

What’s so unique today? Is it another global pandemic or other environmental challenge?
Not really – we have lived through these before.

Today, society has changed – we have changed:
– questioning the old values, systems and stories propelling inequality, injustice and division
– acknowledging but don’t accepting the bias in the governing process passed from generation to generation for the last 2000 years
– as self-thinkers we want to build sustainable future based on purpose and new age leadership, not process and blind obedience.

“We need leaders who are emotionally intelligent and able to model and champion co-operative working. ​ They’ll coach, rather than command; they’ll be driven by empathy, not ego. ​The digital revolution needs a different, more human kind of leadership.”

How can we achieve this?
A great question and a simple answer – through rewritten social contract and a “New Beginning” (T. Chapman, 1995).
To thrive, we have to relearn the Stone Age soft skills such as: communication, collaboration, creativity, critical thinking and anti-fragility, because …

Follow us for more insights on 4th Digital Revolution Leadership.